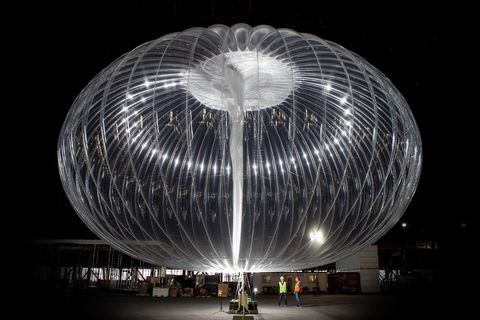 Over the weekend, a powerful 8.0 earthquake struck Peru and neighboring Ecuador. The quake—felt in rural areas and major population centers like Lima, Quito, and even Caracas, Venezuela—killed one person, injured 18 between the countries, and damaged numerous buildings.

But the disaster, which was Peru’s strongest earthquake in over a decade, had one notable difference from others: Within 48 hours, people in affected regions had working cell phones. Loon, a company owned by Alphabet, deployed its signature LTE balloons, which were able to provide service amidst a broken network.

By sheer chance, Loon was testing its balloons in nearby Puerto Rico. The company worked with both the Peruvian government and cell service provider Telefonica to establish the relief effort.

“After requests from the government of Peru and Telefónica,” the company says in a press statement, “we quickly re-directed a group of balloons to the impacted area. Early Tuesday morning, the first balloons arrived and began serving LTE to users below. More are on the way.”

According to the company, Loon “has taken the most essential components of a cell tower and redesigned them to be light and durable enough to be carried by a balloon 20 km (12.42 miles up, on the edge of space.”

The balloons themselves are made of from sheets of polyethylene and are around the size of a tennis court. Powered by solar panels and armed with antennae that can connect to ground stations, the balloons can form a mesh network hovering above a region.

Loon sent the balloons from northern Puerto Rico to Peru, establishing a network in the affected region by creating an invisible chain in the air. One balloon received signals from in-place infrastructure on the ground, and then the signal hopped along nine balloons until it finally reached where it was needed. Each balloon covers around 1,930 square miles (5,000 square km).

Loon’s network over northern Peru. Established in 48 hours, the network passes its signal on until it reaches the people in need.

So far, the company says its service has been used by approximately 20,000 people.

“Of course the promise of Loon is to provide service to the billions of people who need it every day, not just when a disaster hits,” Loon CEO Alastair Westgarth says in a Medium post. “But an additional benefit to Loon serving users on a sustained basis will be the speed with which we’re able to respond to disasters in locations where we’re operational. We’re pleased to be in a position to respond in this situation, and look forward to connecting more people around the world in the coming months.”

Getting cell service in the midst of a natural disaster is crucial for both civilians and first responders. In the U.S. last year, California firefighters faced a crisis when Verizon suddenly began data throttling their connections unless they bought a more expensive subscription service.